I’ve recently seen a number of things on the social media with this quote of Jefferson’s:

“I cannot live without books”

The quote is from a letter to John Adams, and I can understand why it appeals to people. I love books so much that I am dragging a shocking number of them halfway across the country, but I don’t own or want any of the myriad items floating around with this quote on them. 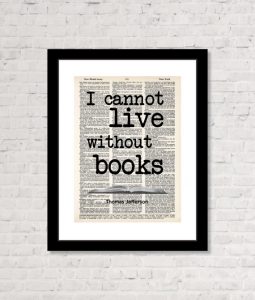 Jefferson was a brilliant man who played a pivotal role in the founding of this nation. He also owned thousands of human beings throughout his life, despite his extensive writings on liberty, and repeatedly raped Sally Hemings from the time she was 14 (he was 44). Jefferson’s lifestyle was possible because of the labor of enslaved people, and he periodically struggled with bankruptcy because of the instability of agriculture and because he consistently lived above his means, in part because of his compulsive purchasing of books. In order to fund this lifestyle, Jefferson often mortgaged his property, including his human property.

Jefferson mortgaged human beings to pay for his lifestyle. He only ever freed two enslaved men during his lifetime. He claimed that black people were not suited to freedom, and that they should be sent back to Africa rather than permitted to live in the land of their birth. He claimed that they could not be integrated into white society. These beliefs were convenient for a man who wished to justify keeping human beings as property and capital, able to be mortgaged or sold to cover his debts when it suited him. 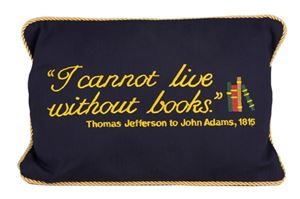 Yes, Jefferson loved books, but he purchased his books with the lives of the people he owned, and that is worth keeping in mind when you see that brief quote stitched on a pillow or emblazoned on a tshirt.